Latin for “woe to the conquered” or “woe to the vanquished,” those defeated in battle should never expect mercy, nor ask for it. According to legend, in 390 B.C Brennus led his army of Gauls to attack Rome. The city fell and the Romans asked to have the city ransomed. They agreed on an amount of 1,000 lbs of gold to be paid to the Gauls. The Romans brought the gold but upon weighing the ransom using the Gauls weights and balances, they accused the conquerors of using rigged weights in favor of the Gauls receiving more than bargained for. Brennus removed his sword and sheath, threw it on the weights and exclaimed “Vae Victus!” And so the Romans were forced to now bring even more gold. 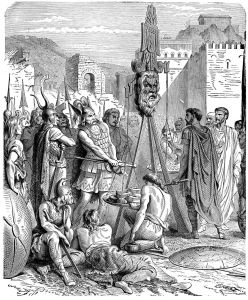 This shirt was printed DTG (direct to garment); the quality is much higher and the colors are much richer and complex as compared to a silk screen print.

Wash cold, inside out. Air dry for long lasting quality!

Visita Interiora Terrae Rectificando Invenies Occultum Lapidem (Visit the Interior of the earth and by Purification, you will find the hidden/Secret Stone)

There are no reviews yet.

Be the first to review “Vae Victus” Cancel reply